Burgh Island, situated directly opposite Bigbury on Sea, is steeped in history and legend, being a one-time haunt of pirates and smugglers, and a hideaway for the rich and famous. 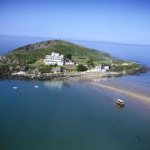 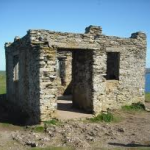 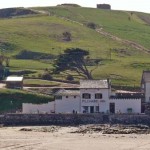 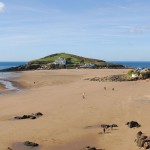 The famous Grade 2 listed, art deco Burgh Island Hotel has been visited by many well-known figures of the 20th century – Noel Coward, Agatha Christie, Edward & Mrs Simpson and Winston Churchill to name but a few. Burgh Island was the setting for one of Agatha Christie’s books “Evil under the Sun”, as well as numerous TV programmes. It is now a luxury hotel.

Burgh Island is connected to the mainland by a lovely sandy beach. This beach is covered daily at high tide. Visitors can still reach the Burgh Island shore by way of a ride on the famous “beach tractor”.

The skyline at the top of Burgh Island is dominated by the remains of the Huers hut, where fisherman would keep a lookout for shoals of pilchards. The views are spectacular and well worth the climb up the footpaths which snake across the island. The Huers hut is built on the site of a chapel dedicated to Saint Michael, as part of a small monastic community that originally inhabited the island

The Pilchard Inn, initially a 14th century hideout for those wishing to keep a reasonable space between themselves & the law. The most notorious smuggler was an Elizabethan smuggler called Tom Crocker, who was allegedly shot outside the Pilchard Inn by a Revenue officer. The Inn is situated at the foot of the island & is a good place to enjoy a leisurely drink on a warm summer’s day.